What is the difference between Cordyceps, Reishi, and Lion’s Mane? We get this question all of the time. These three medicinal mushrooms are incredibly popular in supplements and powders that claim to be “full-spectrum”, or add “balance” to your immune system. However, when we simply look at what species each mushroom comes from we find there is often very little similarity in their effects on our body and mind. These three are considered the best medical mushrooms in the marketplace.

The first major difference between the best quality medical mushrooms is their bioactive ingredients: cordycepin, polysaccharide compounds, and erinacines respectively. When it comes to overall health benefits these three compounds exhibit widely different biological actions; cordycepin (a nucleotide) is cytotoxic, polysaccharide compounds are anti-inflammatory and immune-stimulating, and erinacines (a sulfur-containing terpenoid) have been found to be hepatoprotective. 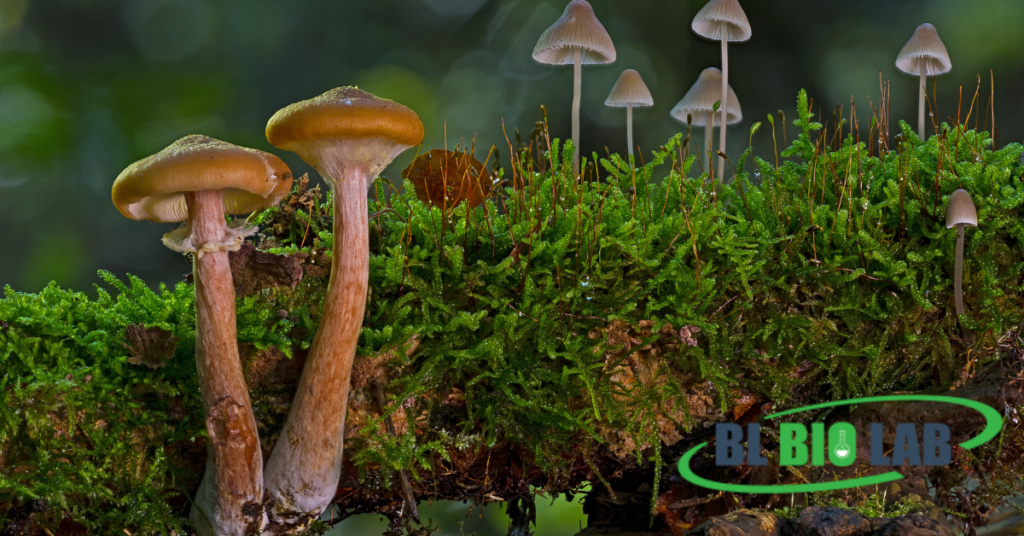 Reishi Mushroom also has a whole variety of compounds that may contribute to its health effects including Beta Glucans, polysaccharides, triterpenoids, and phytosterols. Like other mushrooms, there is a large variability in the chemical composition of samples from different regions as well as from year to year. For these reasons it is difficult to say what specific effects Reishi mushroom will have on you without knowing what part of the mushroom you are ingesting and how much. In general terms, it has been shown to reduce inflammation and increase immunity, and since these effects have been demonstrated in a number of clinical studies it is safe to say that reishi works.

At the end of the day, a person must consider what they want from their medicinal mushroom supplements. Some may seek to support their immune system while others are more interested in cognitive performance. In this sense, there is no ‘best’ mushroom supplement for everyone since people’s needs vary greatly. Cordyceps is arguably more well-known than either reishi or lion’s mane and has been used medicinally for centuries in Asia. The former has been said to have a vast array of health benefits while the latter is known for its anti-inflammatory properties and cognitive enhancement capacities.

The reishi mushroom is a polypore fungus that grows on trees throughout temperate and tropical regions around the world [ 1 ]. The medicinal properties of the reishi mushroom have been praised for centuries in Eastern Asia where it is used to support a healthy immune system [ 2 ]. The reishi mushroom contains antioxidants called triterpenoids that are anti-inflammatory agents, which can help to fight off harmful effects brought on by free radicals. While this may seem like an abstract concept, free radical damage has been linked both with aging and disease formation [ 3 ].

Furthermore, recent studies have shown that the reishi mushroom could be helpful for patients suffering from renal cell carcinoma, which is one of the most common forms of cancer among males in China [ 4 ]. Reishi mushrooms also contain polysaccharides such as G.L.3 and β-D-glucan, which have been shown to be immune-supportive and helpful for cancer patients [ 5 ].

Other benefits associated with reishi mushrooms include a lowered risk of cardiovascular disease due to its cholesterol-reducing properties, as well as being an anti-tumor agent [ 6 ]. The latter benefit is seen in the way that it inhibits tumor cells from growing via direct contact. Reducing blood pressure along with fighting inflammation can help reduce the chances of developing these types of diseases later on in life; however, there is also some controversy surrounding this health claim since evidence has mainly been extrapolated from animal studies [ 7 ].

Lastly, it should be noted that not enough research has been completed using human subjects to make any concrete conclusions about the medicinal effects of reishi mushrooms. Despite this, many people have reported experiencing anti-inflammatory effects after taking reishi extracts for a period of time [ 8 ]. 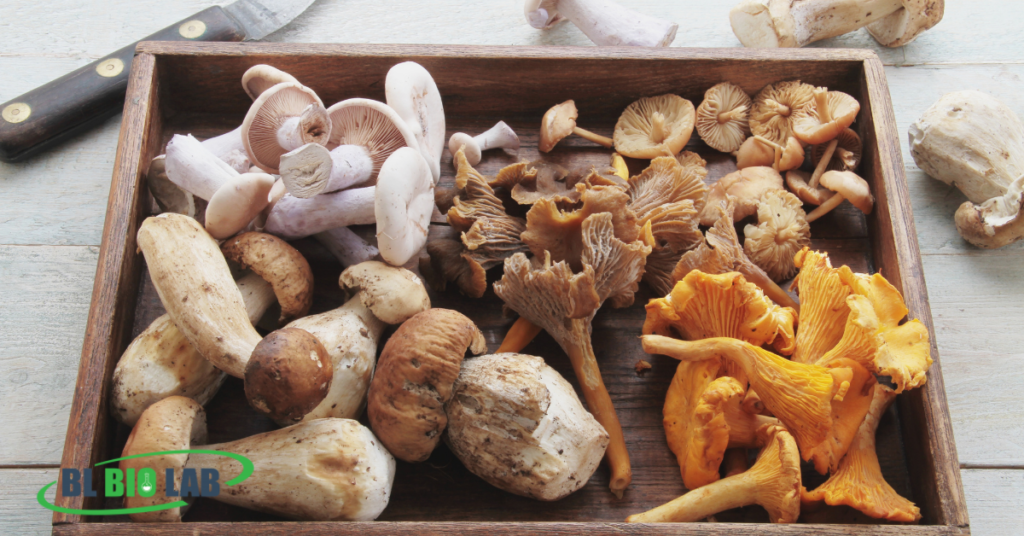 The lion’s mane mushroom goes by the scientific name Hericium Erinaceus and is known for supporting brain health [ 9 ]. One of the main ways that the lion’s mane mushroom does this is through an increase in nerve growth factor (NGF) production. This peptide acts on the cholinergic system to support neuronal regeneration which allows for faster transmission between neurons [ 10 ]. Although some people may think that cognitive decline is something that happens only with age, it has been found that there are plenty of things we can do to slow down or even stop this decline.

Lion’s mane Mushroom contains an ingredient called hericenones which promotes nerve growth, another called erinacines which exhibits anti-inflammatory properties. In addition to this, there are also polysaccharides, sterols/terpenes, and alkaloids that probably contribute to the mushrooms’ health effects. While there isn’t as much research on Lions Mane Mushroom as there is for Reishi or Cordyceps it has been shown to be effective at preventing and decelerating neurodegenerative diseases and improving memory function. The bottom line here: if you want a mushroom with strong cognitive benefits go for Lions Mane, if you want one that boosts your immune system and reduces inflammation go for Reishi.

Last but not least, we have cordyceps — a medicinal fungus known for its powerful effects on the immune system as well as promoting longevity [ 11 ]. One way that this is thought to happen is through the prevention of oxidative damage and improvement in metabolic function by cordycepin, which is an adenosine nucleoside analog that can increase ATP concentrations inside cancer cells [ 12 ].

In addition to this, there was a study done on mice where it was found that taking cordyceps supplements helped support their natural defenses against bacterial infections like E. coli and Staphylococcus epidermidis. This effect has been attributed to Salmonella-specific proteins, which were found in cordyceps supplements [ 13 ].

In another study, it was found that supplementing with cordyceps helped to support the immune system and allow for greater physical performance when taken at a daily dose of approximately 1g/day [ 14 ]. This same study also showed an increase in levels of antioxidant enzymes such as glutathione peroxidase and superoxide dismutase. Lastly, it should be noted that most of the studies done on cordyceps mushrooms have been animal studies or test tube experiments—therefore more human-based research is required before any concrete conclusions about its health benefits can be made [ 15 ].

Reishi, lion’s mane, and cordyceps — all three mushrooms have different benefits and work in unique ways to support your health. If you are interested in taking supplements, it is recommended to speak with your healthcare professional first [ 16 ]. 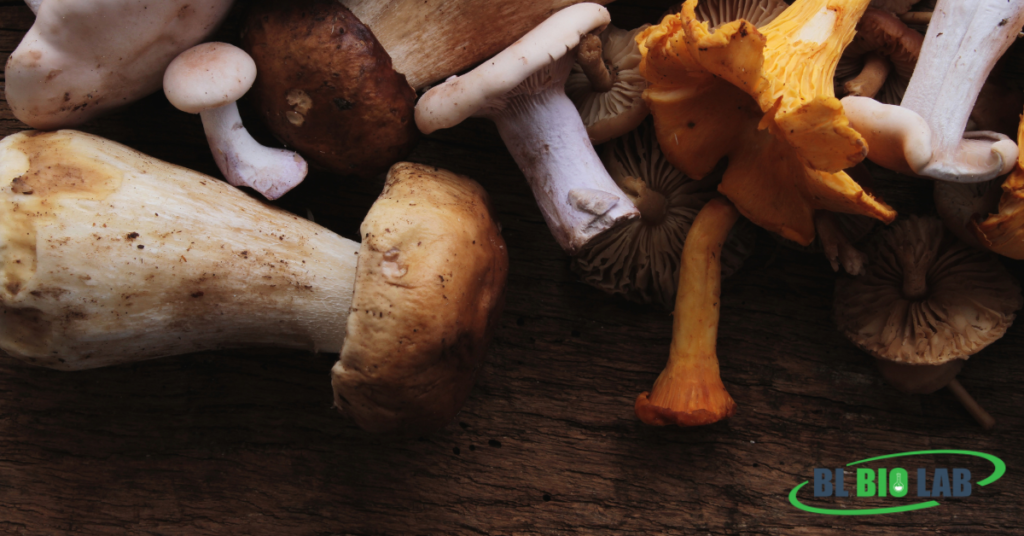 Whether you are a small business or a start-up, it is best to educate you to supplement your business as this industry is an exciting one and offers big bucks when you scale up the business.

There are many things when it comes to supplement manufacturing that needs to be taken into consideration and most people do not know what they need to know and end up making mistakes that can endanger their business. Hire BL Bio Lab as your supplement manufacturer and we manufacture the best medical mushroom supplements you will be able to work directly with our Research & Development team in creating the product that is the best fit for your brand. Call in or enter our web form/contact form to be contacted today. Looking forward to hearing from you and thanks for reading!

10) Ooi, Keat Teong, et al. ” Optimization and validation of a top down LCMS method for the isolation and structural elucidation of bioactive constituents in Cordyceps.” BioMed Research International 2013 (2013).

14) So, Chung-Shi, et al. ” Structural features and hypoglycemic activity of a polysaccharide from the cultured mycelia of Cordyceps cicadae .” Carbohydrate Polymers 86.1 (2012): 618-626

* These statements have not been evaluated by the Food & Drug Administration. This product is not intended to diagnose, treat, cure, or prevent any disease. The article “Best Medical Mushrooms in Supplement Manufacturing” does not claim to be a healthcare-recommended source.

Sidebar
Start typing to see products you are looking for.